A big thanks goes out to everyone who attended the eleven monthly events we call Beerstitution. Here’s the recap of our Byear One anniversary event held on September 9, 2015, our twelfth edition!

First, how did we choose which beers to actually taste at our annual review? Naturally, we planned to review all Best in Show beers from Byear One. We ran into some issues when we couldn’t find some of the past winners (due to seasonality or low stock levels, etc) but we did our best to find adequate replacements. In terms of the tasting order? Well, that was easy – we started with breakfast and worked our way through to black forest chocolate dessert.

And now, for the most important thing… The Winner of our Byear in Review, the BEST in show, the First Ever Beerstitution Annual Champion… is none other than: Anders Kissmeyer’s Nordic Pale Ale collaboration with Beaus Brewery in Vankleek Hill, Ontario is an absolute marvel. It is a beer that surprises, pleases and keeps you wanting more. It also succeeds in pleasing everyone from neophytes to veterans, and does so with no pretension. It’s a beer that just works, so to say. It has the perfect balance between fruity aromas, hoppy nose & mouth, herbal notes and a lingering bitterness that somehow remains crisp the whole way through. In short, it’s our favourite, by a landslide. Anders Kissmeyer, not only are you a funny man to listen to, but you are truly a Hop Wizard. We salute you!

To celebrate our first year of beer, we kicked off BV 12 with a quick overview of the origins of Beerstitution.

In short, Corey and I rambled through a deep, complex backstory of our desire to formalize an organized event that was scheduled and planned ahead of time. The result was a planned, established evening, once at the beginning of every month, more specifically, the first Wednesday of each month to be our elected day of beer tasting.

Hump day was chosen because there’s usually a hockey game on Tuesdays and Thursday & Friday evenings are generally booked. As well, to be fair, while some of us might enjoy a brew or two early in the week, most of us are still recuperating from our weekends of late nights and family get-togethers. Plus, it’s just awesome to have a planned night of beering smack dab in the middle of the week. As an aside, note to new Beerstitutioneers: don’t book Thursday morning meetings of great importance. Moving on…

Corey and I then decided to give a shout out to all the wonderful Beerstitutioneers that made Established Wednesdays (“Est’d Wednesday”) possible.

We started off by naming the fallen soldiers who disappeared from the scene – you know who you are (*cough*, *cough* Chris T., Amadou D., Banane). We then moved on the listing off the one-timers who were kind enough to show up once, but never again (*cough*, *cough* Simon C., Matt S. and Mathieu G.). Consider these call outs to you guys as a reason for y’all to show up in Year 2.

The real fun finally started when we listed out the Special Category winners of Year 1.

The Iron Man Award
Awarded for most attended Beerstitution events in the year:
Shared amongst John M., Phil T., Daniel W. and Corey P. These super-Beerstitutioneers attended 10 BVs throughout the year, that’s only 83%…that’s like a B grade. We can do better than that in Year 2 I’m certain!

The Cal Ripken Jr. Award
Awarded for the longest streak of continuously attended events:
Shared by John M. and Geneviève LF. The number of straight BV appearances was 8. Will anyone beat this record? Only time, and Wednesdays, will tell.

The Rookie of the Year Award
Awarded to the best newcomer of the year:
Graciously and unanimously (between Corey and I, lol) given to Geneviève LF. She hosted an amazing event in March, and enthusiastically showed up every month thereafter for the rest of the year. Wow. Nice. Work. Gen! Who’s it gonna be for Year 2?

Note: as a joke, all award-winning recipients received a nice cold can of PBR. Yum.

Highlights of the Year

Themes
We recapped the year of beer by listing out each theme. Please feel free to peruse the pages of this blog below to learn more of each one yourself. In short, they were: 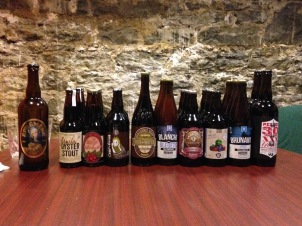 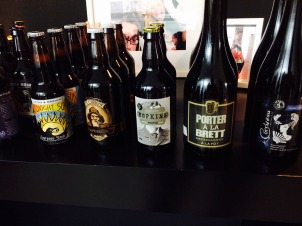 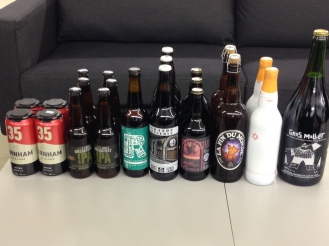 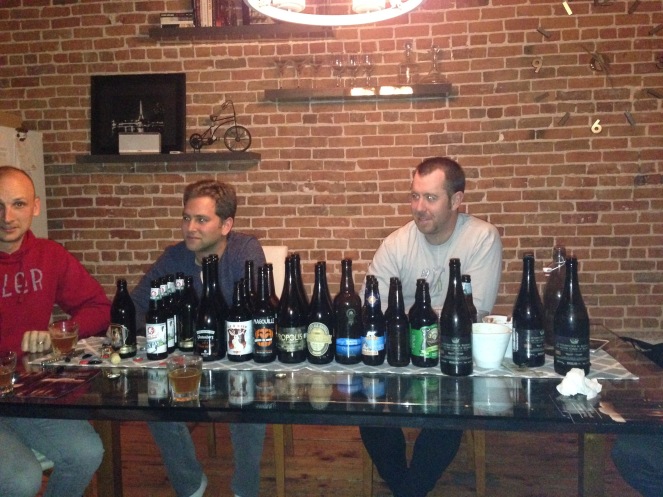 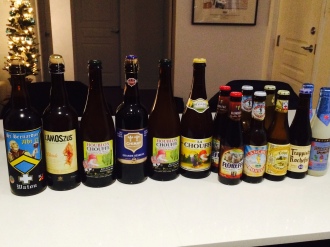 Quotes
Corey and I thought it would be amusing to repeat some of the classic one-liners proclaimed during our many laughs throughout the year. And yes, we took notes at every event to remember our silly, tipsy words. The most infamous and inappropriate quotes will not be repeated here, but to share a few, here are some of the more PG-friendly words:

“This tastes like the walk of shame feels.”
author unknown, referring to Series R, BV5

“I feel like the Bachelorette.”
Geneviève LF, BV6 (our only female Beerstitutioneer)

“This is my second longest relationship.”
Ricky B., BV6 (referring to his relationship with Beerstitution)

Rules
Throughout the year we came up with two ground rules that will carry over into Year 2.

Special Categories
Over the course of eleven iterations of Beerstitutioning, we, as a team, also added some special categories to each volume.

Number of Beers
Face it, we all love facts and numbers. And if you had been fortunate enough to attend all Beerstitution Volumes during Year 1, you would have consumed 85 different beers. That’s pretty cool, and I wonder if next year we’ll be able to up the ante and maybe get into the 90s. For that we’re going to need your help! 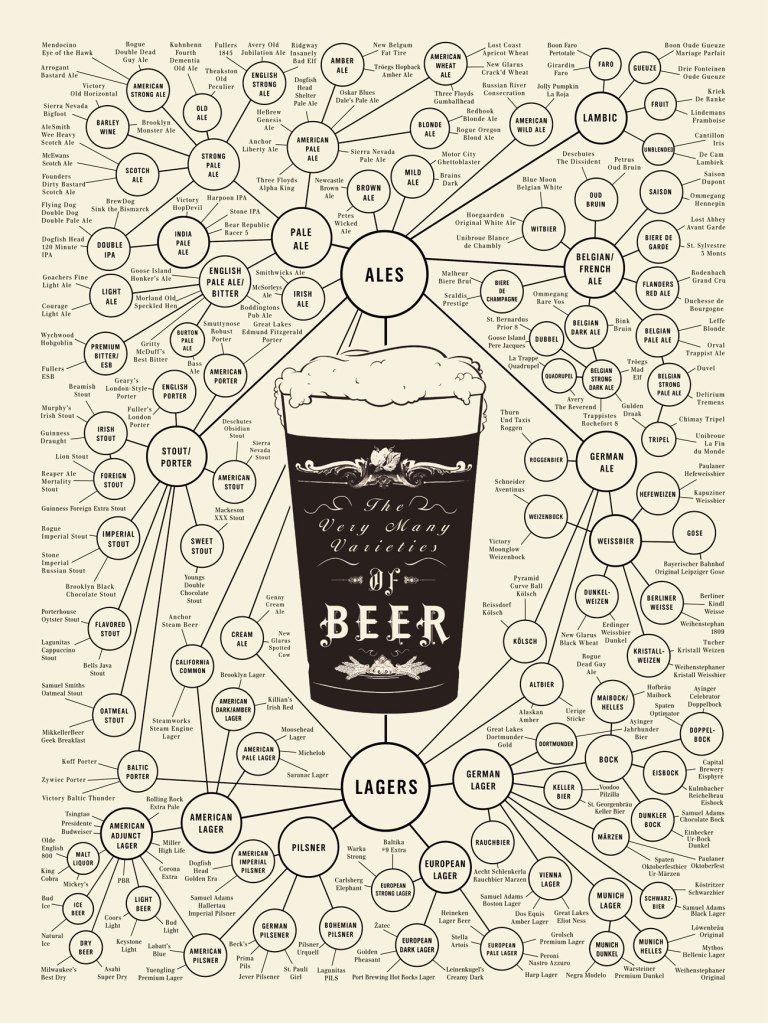 Swag
We went ahead and made ourselves some hats. Because, well, drinking beer goes better with trucker hats.

As the spokespeople for the Beerstitution organization, we think it should be our mission to include more people (aka friends we haven’t met yet) in Byear 2. We’d love to include more Beerstitutioneers of the female variety. A bunch of rowdy, Miley Cyrus signing, foosball playing dudes is most def a fun time. But to be frank, the last thing we want to be is some archaic, lame ass boys club. Women unite! And join us to raise a glass!

We’re looking forward to another Year of Beer housed all over Montréal by amazing Beerstitutioneers with a thirst for knowledge and beer… and sometimes late night stumble-poutine.

On to you Beaus Family!