Wow, what are the odds we decide to make Beerstitution Vol. 14 in December a Christmas beer theme? Crazy, I know right?

Attendees of the event were the magnificent seven: Lauren, Chris T., Dave, Phil B., Gen, Dan and John — a solid line up with serious depth when it comes to BV attendance and performance. Oh ya, and Phil T. showed up late, classic Phil. Love that guy. On a side note, this event was Lauren’s last BV with us in Montréal. Beer ye, Beer ye to you, Lauren. We appreciate you being the second female of the group. And remember, you’re a BV member and friend for life! You’ll be missed 😉

We had all carolled the classics and baked shortbread cookies beforehand, so we were more than ready to sip some malty and spicy beer nog. 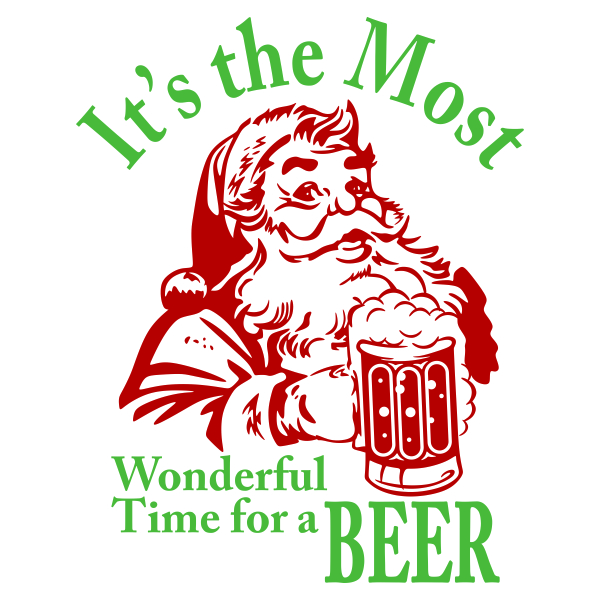 As a seasonal beer, Christmas beers are generally brewed in time for December and January Holiday time consumption.

The majority of these beers have a high % ABV and share flavours strong in spices made up of ingredients orange peels, cloves and vanilla.
Countries with historic Christmas heritages include Belgium, France and Britain with the winter warmers.

As per our somewhat loose Beerstitution guidelines, we lined up our Christmas beers by increasing ABV %.

This beer was malty with some hints of spice and also had a mouthy-wine feel to it.

As is generally the case with the first beer, it’s hard to get a lot of comments and comparisons right off the bat. Hence the reason, we Beerstitutioneers are huge advocates of warming up with some pre-beering beer. Yes, it’s thing and we encourage y’all to try.

Our second beer was a brewmaster collage between Dunham and Kissmeyer. It’s a cozy 6.9% and is named after an ancient Danish god.

The Second Coming of Broderus goes without saying that this beer won Best Name of the night.

It’s flavour profile includes lots of bitterness and consists of a sweet symphony of maple syrup and pomegranate.

Who likes fruitcake? Anyone?

If you’re one of the few, consider yourself lucky. We found you a perfect beer pairing companion for that classic holiday dessert.

As one our friends at BV 15 so eloquently put it, Trou de Diable’s Grivoise de Noël “tastes like Christmas.”

Unfortunately (and unsurprisingly), as most of us familiar with the shortcomings of fruitcake, this beer was not good.

I guess they all can’t be winners.

Our fourth beer was a strong 8.5% and hailed from a brewery in Gatineau. The name of this heavy brew was Saison de Basse and was best remembered for its minty aftertaste.

Have a hard time figuring how that might taste? Think the classic chocolate-mint dessert After 8. Ya. That in a malty, high % format.

The BVers clearly don’t want their beer to taste like that and so, overall, this beer did not score so high.

Our BV buddy Phil B. brought us something nice from La Chouape, the Fait Froid.

Sadly, not much was commented on this beer (my guess we got in a heated beer convo/debate and I forgot to take notes), so please have a read here for more info on this 7%.

Having met the brother brewers out in Trois-Rivières, QC in person, both Chris and I have a soft spot for the Les Frères Houblon brewery. Some real, hard working guys doing their thing, day-in and day-out, they make some good beer. But man oh man, it seems like nobody can get Christmas beers right *sigh*.

Chris brought us the Noël 2015 from the ‘brothers hops’ and sadly, all the love and respect in the world for these guys couldn’t bring up the score. For the most part, there were some unfavourable comments, but the best way to explain how this tasted was “sour candy apple.” Not sure about you, but I’m not crazy about that profile in my brew.

Another great comment about this beer was comparing it to Tetris experience, “you get all the right pieces, but somehow you still fuck up.”

Hide yo kids. Hide yo wives. And hide yo light baby beers.

As Daniel always does, he brings us some serious brew. For this event, we got to taste some Red Sashes from Dunham. This sucker was a whopping 11% with a 125 IBU count. Dammmmn, Daniel.

This magical mix of rye wine and beer components was a fan favourite. It scored pretty damn high and had some great comments like:

– Referring to the characteristics of bitter and Brett, “It’s bretter.”

It’s rare indeed, but it’s not everyday you get the chance to drink the “world’s greatest beverage.” Marketed as such, I decided to introduce my friends at BV 15 to the masterpiece that is Samiclaus.

Brewed only one day a year (every December 4th), in Austria by the Brauerai Schloss Eggenberg, this magical beer is a monstrous 14% ABV and is meant to be taken seriously.

Not for the light stomached, this beast of a beer can be a sweet, sweet pairing with most desserts. Speaking from experience, I would also tackle this beer ideally on its own or after a base of food. It comes in a 330ml format and is essentially a liquid dessert / meal that can be easily consumed quickly. And this is where the potential hazard lies. A 14% beer that is consumer at the same rate as your average joe light beer is not a good idea. That big ABV can hit hard.

As fun as a Christmas / Holiday themed BV sounded in theory, and coincidentally in December (weird eh?), I confidently speak on behalf of the team of BV 15 that these dark, heavy, malty concoctions are tough to get right. A spectrum of seven different types of Christmas beers wasn’t enough to convince most of us that this style or theme of beer was going to be a favourite any time soon.

Perhaps we had big expectations. Perhaps we chose wrong and missed some great beers. Perhaps brewers are trying too hard to add spices for the sakes of adding spices.

What we do know is that there has got to be some great Christmas / winter style beers out there. Got any suggestions? Please share!

John
That Guy From Beerstitution