As my social studies teacher told me back in my mildly misspent youth, “Canadian culture is a mosaic and American culture is a melting pot.”  That is all I remember from that particularly uninspiring educator but it does happen to ring true when I try to nail down where exactly to place American Pale Ales in the continuum of beer styles.  The APA takes its roots from the pale ale styles that were prevalent in the British Isles, and in true American fashion, it was broken down,  injected with some bold all american hop varieties, principally cascade, and emerged an unmistakably American beverage that makes you want stand up and shout, “USA…USA…USA!!” like a drunken frat boy at a college football game.

It is not surprising that this patriotic theme reared its head in what many consider the first iteration of the APA. The Anchor Liberty Ale, brewed by Anchor Brewing Company in 1975, was a tribute to the American folk hero Paul Revere.  It is noted by Michael Jackson…no not that one, that this marked the first modern American ale. (This was shamelessly taken from Wikipedia…see for yourself Here)

With this in my our in mind our intrepid group of Beerstitutioneers, or Beerstitutes if will, set out on our odyssey to find the finest facsimile that our mosaic culture north of the border can produce of our southern neighbours’ beloved APA. 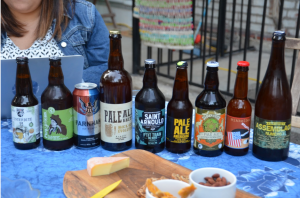 La Bilboquet – Peau D’Ours (Getting closer to an APA)

‘Til next time!
Dave
That Guy from Beerstitution